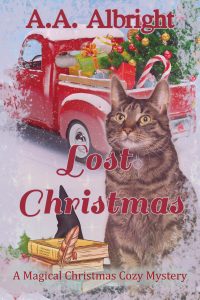 A Magical Christmas Cozy from the world of A.A. Albright. Lost Christmas is a standalone mystery, featuring a shy witch, a chatty cat, and a happy ending.

On their way to visit friends for the holidays, Ariadne and her cat are whisked away to a strange new place: the legendary land of the Lost Enclave.

They’ve been taken against their will, along with two other people: a handsome wizard called Chris, and a chef called Molly.

Ariadne, Chris and Molly are now prisoners of the cruel Queen Clara, a queen who enjoys nothing more than beheading her enemies. And she has brought them here for a reason.

The castle’s cook was murdered with a poisoned mince pie, and the king is missing. Ariadne’s task is to find out who intended to kill the queen. Chris’s task is to unlock the castle’s vault, and obtain the mysterious Star for Queen Clara. And Molly’s job is to replace the dead cook.

When the king, too, is found dead, the mystery deepens. Can Ariadne, Tigger and her new friends discover what truly happened to the king and the cook? They would like to know what the Star is, too, before Chris unlocks the vault – could it give the horrible queen even more power?

In the Lost Enclave, Ariadne, Tigger and their new friends have lost their freedom. They must solve the mystery and escape in time for the holidays, or they might lose Christmas, too.