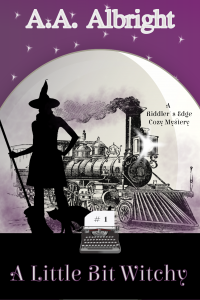 There has most definitely not been a murder on the Riddler’s Express.

Aisling Smith is about to try out for a new job – a job writing for a paper she’s never heard of.  But seeing as she’s currently writing classified ads and obituaries, it would be foolish not to give it a shot.

Riddler’s Edge might be a small town, but it’s definitely not boring.  The train hasn’t even pulled into the station, and already a woman has been murdered.

According to the grumpy but gorgeous Detective Quinn, the passenger’s death wasn’t a murder at all.  He insists that Bathsheba Brookes died of a nut allergy.  Aisling doesn’t believe it for a minute.  She intends to discover the real story – a difficult challenge, considering the town’s inhabitants seem to be keeping some very big secrets.

Riddler’s Edge is a town where people wear sunglasses after dark, and creatures howl in the woods.  It’s also a town where, despite the strange occurrences, Aisling feels right at home.

But even if she gets to the bottom of Bathsheba’s death, Aisling might not get to be the Daily Riddler’s newest reporter.  There’s one final, mysterious test that she must pass – a test carried out by the newspaper’s owner.  And Aisling suspects he might be looking for more than just a journalist … 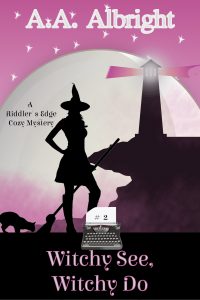 There’s been another unfortunate death in Riddler’s Edge. And just like last time, this one definitely wasn’t a murder.

When Heather Flynn is found hanging from the church bell, it seems clear that she killed herself. But Aisling Smith is convinced otherwise – and not just because it appears that Heather’s death was a resurrection spell gone wrong. There are mysterious symbols painted below Heather’s body – symbols which emit a green glow that only Aisling can see.

But when yet another member of the choir is killed, the case gets stranger yet. Aisling and Detective Quinn find themselves involved in the gruesome game of Witchy See, Witchy Do – a game from which no player has ever emerged alive.

Available to purchase from Amazon, and free to those in Kindle Unlimited 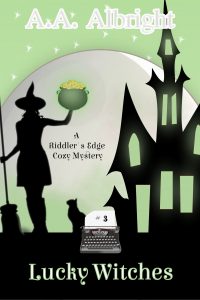 Just because Detective Quinn is on holiday does not mean that the rest of Riddler’s Edge gets to take a break.

And it definitely doesn’t mean that Aisling misses him.

But even if she did miss him – ever so slightly, mind you – she has far more urgent things to worry about.  Like the fact that every single person the detective asked to look after his lighthouse has met with an unfortunate accident.  Or the fact that a mysterious casino has appeared overnight – and instead of winning money, the gamblers are winning wishes.

These wishes are not all they seem, and as violence and chaos break out, it’s becoming ever more likely that the detective’s lighthouse is keeping a secret of its own … 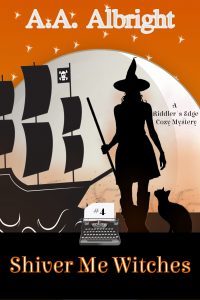 It’s Halloween in Riddler’s Edge, and everyone is having a wonderful time. So wonderful that they don’t seem to care when two women are murdered on Pirates’ Pier.

There’s a strange new magic affecting everyone. Everyone, that is, except Aisling Smith. But without the help of her friends, will she be able to find the killer in time?

Dealing with murder, magically-altered friends, and a fair few ghosts and pirates is going to make for a busy Halloween. But even if Aisling gets through all of that, there will be one more mystery left to solve. A mystery that means more to her than anything.

Will she finally discover what happened to her parents?

It’s available in all Amazon stores, and is free via Kindle Unlimited.  Here are the store links: 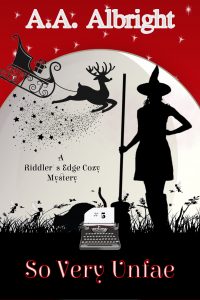 The holidays are coming.  It’s a time for family, frolics and … mince-pie murders?

All that Aisling wants to focus on this Christmas is how to reunite with her long-lost family, but Riddler’s Edge has other ideas in mind.  When a mince-pie muncher dies at the local holiday market, it seems she might have to put her hopes on hold.

The victim hadn’t just come to Riddler’s Edge to enjoy the festivities.  He had come to see Dylan Quinn, but what they don’t know, is why.

When another man dies – a man who worked for the same, mysterious company as the first victim – it seems clear that there’s a connection.

On the surface of things, these deaths seem like accidents.  Aisling really hopes that they are, because right now, she has other problems – as she works to free her parents, it seems that someone might be trying to scupper her plans.

There’s a lot to overcome if Aisling is ever going to have her perfect Christmas.  But someone as stubborn as her ought to be able to manage it all.  Right?

Here are the Amazon Store Links (as always it’s free via Kindle Unlimited): 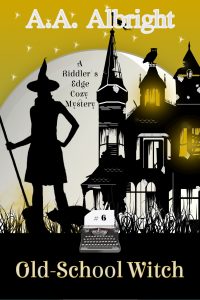 Is it ever a good idea to dig up the past?

When a member of the Historical Society is murdered, there’s no magical cause to be found.  If anything, it seems like it might be a case of simple revenge.  But when the society goes on to unveil an old, forgotten school in Riddler’s Edge, it seems that there could be far more to the murder than meets the eye.

Riddler’s Edge School for the Gifted was a safe haven for supernatural children.  So why was the school set on fire in the sixties?  And why has it been forgotten until now?

In order to find the real murderer, Ash and the gang must first find the surviving students.  Along the way, they might just dig up some more secrets, too – like who is really behind the group known as Vlad’s Boys?

And until they find the answers, they have a wedding to organise, a wedding that almost everyone believes is doomed …

Store links are below – as always, you can read this title for free in Kindle Unlimited: 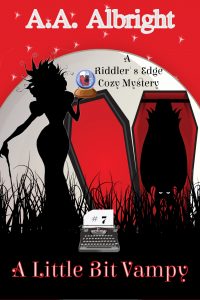 The battle is on …

Aisling and her friends have been trying to find the leader of Vlad’s Boys for a long time. Now, they finally know the truth behind the vampire gang. Unfortunately, they also know that Vlad’s Boys have a new, unknown source of power to rely on, and beating them seems like an impossible task.

But there are other troubling things happening in Riddler’s Edge. Wizards are being murdered in a very unusual way. And Greg – recently turned into a vampire – is enjoying his new life a little bit too much.

They need to find a way to turn their lollipop-loving wizard back into himself again, because without Greg on their side, the fight against Vlad’s Boys might well be lost.

Store links are below – as always, you can read this title for free in Kindle Unlimited:

*This one features Pru as the narrator and isn’t technically part of the main series, but I’m including it in this list for those who like to read in order* 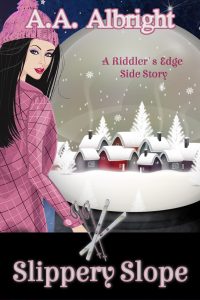 When Pru and Greg head to the enclave of Snowy Hollow for the Winter Wizard Festival, they’re looking forward to a weekend of snow-filled fun. But Snowy Hollow is not what they expected. The enclave is ruled by the Byrne coven, whose hobbies include: being mean to the yeti, blaming other people for their crimes, and littering the enclave with upmarket bars and terrible food.

When Pru predicts the death of a famous sportsman, Oscar Brown, things take a deadly turn.

Pru and Greg find themselves suspected of Oscar’s murder, and unable to escape the enclave. Together with some newfound friends, they set out to track down the real killer, stop the Byrnes from destroying the enclave, and find a way home.

There will be mystery, vampire magic, and a whole lot of snacking along the way … 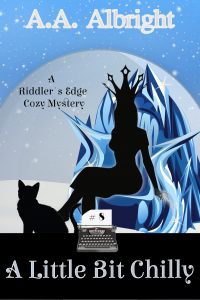 It’s summertime in Riddler’s Edge, so how come it feels so chilly?

While the town prepares for a performance of The Snow Queen: The Musical, some very frosty murders occur. Have the victims been frozen by an over-enthusiastic air conditioner, or is there magic involved?

Aisling will need her friends to help her crack this case, so it’s a little unfortunate that Dylan is avoiding them all. He also has a secret visitor at the lighthouse, and Aisling is itching to get to the bottom of that little mystery, just as soon as she stops the entire town from freezing to death …

As always, it’s free in Kindle Unlimited.  Here are the Amazon store links: 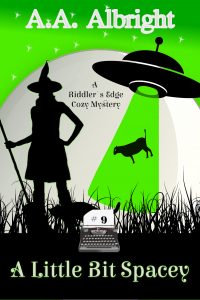 Abducted cows? Crop circles? Surely Aisling Smith lives in a town filled with magic, and not science fiction. So why does it seem like the aliens are coming?

At a town festival, a popular cow disappears. The following day, it’s a man who’s vanished. As more and more animals go missing, and crop circles appear around town, Aisling learns that the same thing has happened in Riddler’s Edge once before. Have the missing men and animals been abducted by aliens, or is the culprit closer to home?

As always, it’s free in Kindle Unlimited.  Here are the Amazon store links: 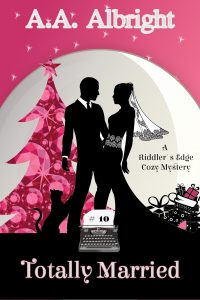 This holiday season, Aisling Smith has everything she ever wanted. She knows what age she is this birthday, she has her parents to celebrate the Winter Solstice and Christmas with and – oh yeah – she’s marrying the love of her life.

But this is Riddler’s Edge, and if Aisling’s learned anything since moving here, it’s that no celebration is ever complete without a murder …

The murder victims are integral to Aisling’s wedding – like her DJ, for starters. Is someone trying to stop the wedding, or are they trying to send a message? Either way, Aisling and Dylan need to find out, and soon. Otherwise, the wedding might not happen at all.