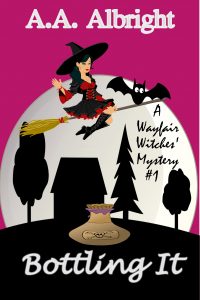 Book One: Bottling It

Wanda Wayfair is a bit of a late starter.

At almost twenty-one she still hasn’t received her magical powers, and she’s running out of time. But that doesn’t bother Wanda. Much. Not when she can spend all of her time in the human world and pretend that her coven doesn’t exist. But when Wanda takes a job at Berrys’ Bottlers, working with the handsome Will Berry and his unpleasant Aunt Alice, she soon realises that she’s a lot closer to the magical world than she thought.

All over Dublin, humans are murdering witches. When asked why, all they’ll say is, ‘I dunno why I done it.’ But Wanda thinks she does know why they’ve done it – and hopefully she’ll receive her power in time to help her coven discover the truth. 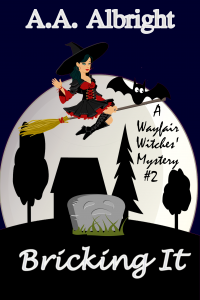 All her life, Wanda thought that things would be better once she received her magical powers. Turns out, not so much.

But Wanda’s coven needs her now more than ever. Witches are going missing, and skeletons are turning up in closets and changing rooms all over Ireland. Will Wanda stick to the Minister’s rules, or will she risk it all to help the people she loves? 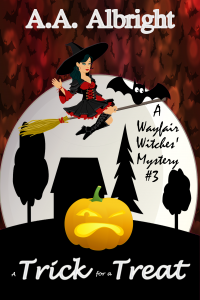 Book Three: A Trick for a Treat

It’s Wanda’s first Halloween at home for years, but that doesn’t mean she gets to enjoy the holiday.  A famous werewolf has disappeared, and his girlfriends are getting knocked off one by one.  Murder and mayhem might be all in a day’s work for the Wayfair coven, but this time the stakes are higher than ever.  This time, Wanda’s own friends are under suspicion.

Wanda needs to discover the real culprit, and she needs to do it fast – otherwise the people she cares about could spend their lives behind bars.  Oh, and while she’s at it, she also needs to pass another few of the Minister’s tests.  But who ever said that being a witch was easy? 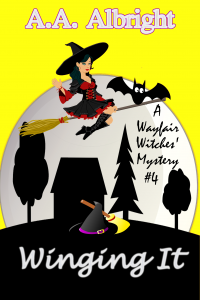 A witch, a weredog and a wizard walk into a bar …

When three unlikely friends kill themselves in a popular weredog bar, Wanda Wayfair is convinced that there’s more to the story. With the coven’s work now in the hands of the Minister’s Peacemakers, an investigation would be ill-advised.

But since when do witches listen to advice?

All of the deaths have something in common – every one of the deceased worked in Plimpton’s Brooms. With the Everest Climb – the biggest broom race in the witching world – about to take place, Wanda hopes to find the answers there. Especially since Everest is also the place where an annoying young witch was last seen in public.

Wanda needs to solve the murders, track down Candace Plimpton and return her to her cute-as-a-button kitten …

And while she’s at it, she might finally find out what her broom has to do with it all. 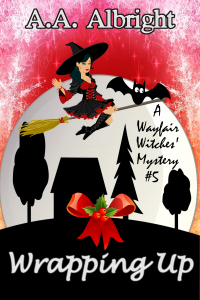 It’s the most wonderful time of the year – or at least it would be, if one of the most popular witches in Riddler’s Cove hadn’t just been murdered.

When Winnie Wywood is found, strangled by festive ribbon and wrapped up like a present, there are two main suspects.

Suspect number one is the father of Wanda’s boyfriend, which might make the holiday period ever so slightly awkward.

Suspect number two is a woman who seems all too keen to admit to the murder.

Wanda hopes to track down the culprit before the Winter Solstice celebrations get underway. But there might be a little more to worry about than who killed Winnie … 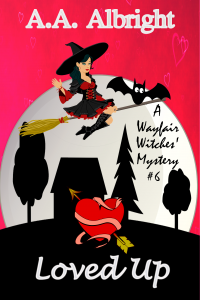 For the Wayfair Witches, the romantic season is beginning. Unfortunately, it’s beginning with a murder.

When Nancy Berry is killed during spring celebrations, the reason seems clear to her coven leader. Will Berry believes that Nancy was killed as a threat, to force him to vote the right way in an upcoming election.

But Wanda thinks there’s a far more fiendish reason for Nancy’s murder. She suspects Nancy was killed by the mysterious assassins known as the Dark Team.

Wanda and the gang are closer than ever to tracking the killers down, but they might be about to experience a slight delay …

Because while the romantic season might have begun with a murder, it hasn’t stopped the Wayfair women feeling amorous. Maybe even a little too amorous …

Could there be a love potion at work? 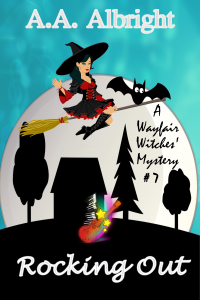 The Call of the Wild are the most famous werewolf rockers in the supernatural world – but that might be about to change, seeing as their fans are turning up dead.

When the bodies of two young superfans are discovered, all evidence points to the Call of the Wild. Wanda hopes that the rockers aren’t the real killers – especially since her best friend has a thing for their singer.

Wanda and the gang must delve deep into the world of werewolf rock and roll. But the case proves far more complicated than it seems – particularly since the victims’ familiars have been murdered, too …

Here are the store links (and as always, it’s free to Kindle Unlimited subscribers) 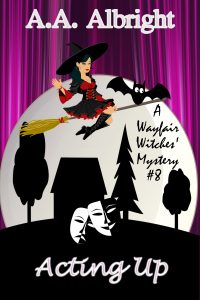 Wanda Wayfair does not believe in prophecies…

There’s a murderer on the set of Be My Witch, and Wanda is afraid that all the wrong people are being killed. Because in the vision she saw, Mandy Parker was the one who died.

With the help of the victims’ familiars, Wanda races to solve the case. But can she find the killer before Mandy becomes the next victim?

Wanda really hopes so – because if not, she might have to admit that prophecies can come true, after all

Here are the store links: 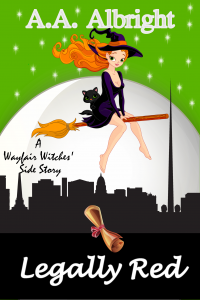 *Technically this one isn’t part of the series.  It features Melissa as the main character instead of Wanda, and it can be read as a standalone. The events take place after the events of Acting Up*

Melissa Wayfair might be about to sit the LOL exam, but she sure isn’t laughing about it. Because if she wants to become a legally operating lawyer, then she has to do more than answer a few questions – she also has to clerk under the most obnoxious lawyer known to witch.

While working for Miles Master, Melissa has a lot to contend with. There’s a murder case to solve, there’s a young witch who wants to be emancipated from her parents, and there’s also the slight matter of a broken heart …

But once Melissa has dealt with all of the above, she might have to face her greatest challenge yet – learning how to stand up to her horrible boss. 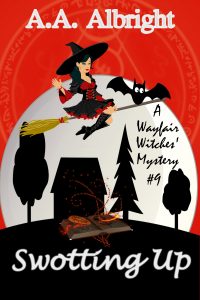 College isn’t quite as much fun as Wanda Wayfair had hoped. But when a dead body turns up in the library, it seems like her crime-solving life might be calling her back.

There’s more at risk, though, than finding the killer. Wanda and the gang also need to track down a Bad, Bad Book – quite possibly the worst book of all.

But as more murders take place, it seems like time might be running out. Will they find the book, and the killer, before an ancient evil is unleashed upon the world? 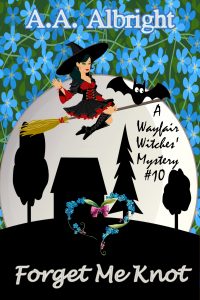 All is well in Riddler’s Cove. There’s no crime, no illness, and Wanda Wayfair is engaged to Will Berry, the greatest Minister for Magical Law that the world has ever known.

Hey, wait a minute … that doesn’t sound quite right, does it? Maybe things aren’t going so well in Riddler’s Cove, after all. And if something strange is afoot, well, Wanda sure can’t be the one to solve it, because she doesn’t have an ounce of magic to her name.

When some healers are murdered, and their familiars ask Wanda for help, she begins to wonder: is she really the unempowered witch she believes herself to be? Or is someone changing the world to suit themselves?

The dead healers aren’t the only ones who need help. Two busloads of weredogs have gone missing, on their way to the holiday of a lifetime.

With her coven by her side, can Wanda regain her power? And when she does, will this strange new world finally begin to make sense?

The store links are below:

Book Eleven: All Hallowed Out 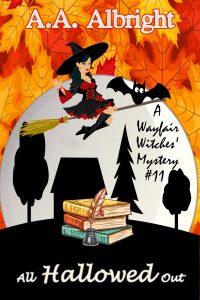 Halloween is coming to Riddler’s Cove.  And this year, it might just last forever …

Wanda and her coven are looking forward to the holidays.  Unfortunately, a dangerous spell is in the works, and in order to see it through, witches are being put to sleep or being murdered, without a clear connection between them all.

With the help of a hyperactive familiar, Wanda and the gang need to track down the novel which began it all.  But with all the copies quickly disappearing, and the book’s writer in a deep sleep, their task is a difficult one.  And if they can’t stop the spell in time, the world will never be the same again.

Will Berry, now imprisoned in Witchfield, might well be the only one who can help.  But only if they can bring themselves to trust him … 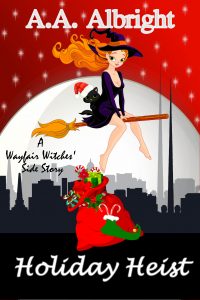 Like Legally Red, this one features Melissa instead of Wanda. Timeline wise, the events take place after Wayfair Witches Eleven.

A holiday heist, a powerful child, and a parolee Melissa can’t stand the sight of? It sounds like a recipe for a very Merry Solstice.

The Nemo Foundation’s kids are planning some Solstice shenanigans, but Melissa has no idea what their hijinks might entail. She’s far too busy figuring out why an emaciated wizard was drained by a harpy, and trying to keep a young weredog out of jail. Plus, the Queen of the Faeries has promised three miracles this holiday season – and in order for those three miracles to pass, Melissa must learn to trust someone she hates …

Here are the store links: 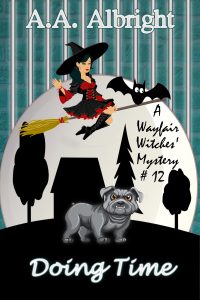 When Wanda kills Baldrick Berry, there’s only one place for her to go: Witchfield Prison.

Being an inmate isn’t much fun – not when Wanda’s the one who arrested a lot of of the prisoners in the first place. And not when two prisoners have died in mysterious ways. Even Witchfield itself has some secrets to be solved.

But when an angry little dog comes to haunt her, Wanda begins to realise that Baldrick’s death wasn’t quite as simple as it seemed.

Wanda must navigate prison life, deal with an angry ghost, and find out the truth. At the same time, she’s discovering new and frightening aspects to her power, and trying to understand her confusing feelings for Will …