Well, I said that the third book of Ned’s trilogy would be coming soon, and I meant it. Dancing with the Dead is available to download now. And as always, it’s free to read via Kindle Unlimited.

Dancing with the Dead 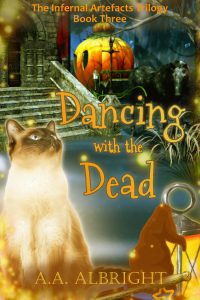 Halloween has arrived, and so has an invitation – Ned’s been invited to the Dance of the Dead.

Ned is certain it’s a trap. She wants to find another way to win this fight. But when people she cares about are kidnapped, it looks like she’ll have to take the bait.

In a mansion filled with ghosts and Servants, Ned must confront the mysteries of her past, and learn who she can trust in her present. The most important thing she’ll learn, though, is who the Spellcaster really is.

When the truth is revealed, will Ned be able to fight the Spellcaster, and escape the Unhallowed Hall alive?

Out Now: A Grave Situation